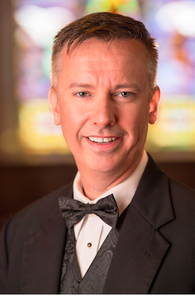 In September 2007, he assumed the duties of Director of Music and Organist at Gainesville, Florida’s Holy Trinity Episcopal Church, where he oversees the parish music program and plays the three-manual, forty-nine rank Visser-Rowland organ in liturgies and concerts.  Since 2014 he has served as Conductor of The Village Voices Chorus, having accompanied the group from 2010-2014.  He has also served as Dean and Sub-Dean of the Gainesville Chapter of the American Guild of Organists.

Previously, Dr. Lowe was Music Director and Organist at Ocala's First United Methodist Church, from 2003-2007, the Artistic Director and Conductor of the Central Florida Master Choir, and Dean of the Ocala Chapter of the American Guild of Organists.

Before coming to Florida, Dr. Lowe was Music Director/Organist at the Church of the Nativity (Episcopal), Indianapolis from 1998-2003, where he oversaw the combination/renovation of the church's two organs and founded the Nativity Series in Music and Worship Arts; and the Music Intern at West End United Methodist Church, Nashville, Tennessee from 1996-1998, where he assisted in service playing, conducting, and accompanying, and was the organist for the Chancel Choir's 1998 CD Hymns and Spiritual Songs.

Dr. Lowe has been a prizewinner in local, regional, and national competitions. In 1991 he was first place winner of the American Guild of Organists Regional Competition for Young Organists in Annapolis, Maryland, and in 1996 the second-place winner of the San Marino, California Organ Competition. In 1998 and 1999, he was one of 25 young artists invited to compete in both the opening rounds of the Calgary International Organ Competition and the American Guild of Organists' National Young Artists Competition in Organ Performance, respectively. He has performed recitals in Alabama, California, the District of Columbia, Florida, Georgia, Indiana, Maryland, Massachusetts, New York, Ohio, Tennessee, and Virginia, and his accompanying engagements have taken him to the Czech Republic, Germany, Austria, New Zealand, and Australia.