Welcome to The Village Voices Chorus

Tickets for our March 14, 2023 will go on sale
​ January 30, 2023.
Come join us on March 14, 2023 at 6pm at the North Lake Presbyterian Church in Lady Lake, Florida as we finish our 25th Anniversary season. We will have a world premier of a piece written and conducted by Bradley Ellingboe.

-Taken from his website-
An American Composer - Ellingboe is an award winning composer and arranger of choral music, with over 150 pieces in print. His works have been heard across the United States, Europe and Asia. He has won annual awards in composition from the American Society of Composers, Authors and Publishers.  For his work on making the music of Norway better known among English-speaking singers, Ellingboe was awarded The Medal of Saint Olav by His Majesty, King Harald of Norway, in 1994.

This coming season is our silver anniversary.  The chorus
has now been in existence for 25 years.   We have some exciting music planned.   All future concerts will be performed at
​ North Lake Presbyterian Church, at 6 pm.
​

About the Village Voices Chorus 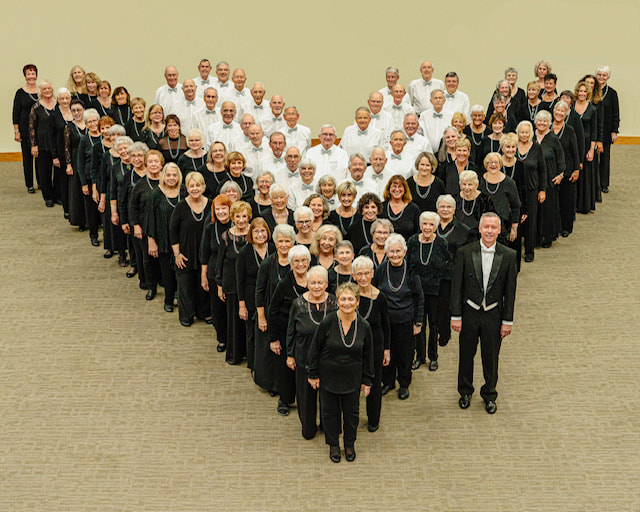 The Village Voices Chorus is a performing group in The Villages, Florida, a group of 130 very musical villagers, many of whom are former music educators and professionals. We rehearse every Friday morning from 9am to 12 noon.

​Auditions are held every August and January to fill the vacant spots.  The season runs from the end of August to mid-March.
​
We usually perform three concerts a year and each concert features a variety of music, from classical, to sacred, to pop, always accompanied by different guest musicians.

We are conducted by Dr. John T. Lowe Jr, currently the Director of Music and Organist at Holy Trinity Episcopal Church in Gainesville.
The Village Voices Chorus is a non-profit charitable organization, supporting music education.

If you would like to make a tax deductible contribution to The Village Voices Chorus, please mail your check to P.O. Box 485, Lady Lake, FL. 32158